Winter skies, aurora borealis, nocturnal silences, forest sounds... the music of Kaija Saariaho (Helsinki, 1952) is inextricably linked with the universe. Although she has been living in Paris since 1982, this Finnish composer feels a deep connection with nature. This relates closely to her having been born and raised in a Scandinavian country where the inhabitants have a more direct, to some extent primal, relationship with their culture. It is natural, then, for Saariaho's music to carry in its DNA this indelible feature.

After studying in Helsinki and Freiburg, Saariaho lives in Paris, following her training at the Institute for Research and Coordination of Acoustics and Music (IRCAM), founded by Pierre Boulez. There she researches and experiments with electronics, which she mainly uses to achieve the acoustic effects that the confined space of concert halls does not offer.

Her relationship with the city of Barcelona is longstanding, as well as her admiration for the architectural work of Antoni Gaudí and Modernism, capable of transforming natural forms into architectural elements, something we also find in the Palau de la Música Catalana by Lluís Domènech i Montaner. In a way, Kaija Saariaho's music seeks to achieve similar effects. Character, something to which she attaches great importance, is easily recognisable in her work, despite the abstract nature of her music. Through its timbre and acoustic effects, Saariaho manages to open a broad palette of colours that burst like the scent of a perfume when it first hits the nose.

The charm of her music lies in its ability to evoke both a deeply attractive sensuality thanks to its connection with nature, and at the same time the cold of Scandinavia, specifically Finland, where darkness and snow are so present for a good part of the year. Certainly, this contrast, inherent in the Scandinavian climate, In short, contrast, something inherent in Scandinavian weather, is also one of the charms of a music that we present at the Palau throughout this season and the beginning of the next, in a variety of proposals and formats ranging from from choral music to symphony, chamber and opera, with a new production of his creation, Only the sound remains. A chamber opera very suitable for the dimensions of the particular stone garden that is the Palau de la Música Catalana and with which we will celebrate the seventieth anniversary of the composer.

Concerts with works of Kaija Saariaho 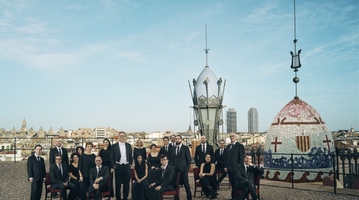